The Swiss National Bank (SNB) has updated its Swiss Banknotes smartphone app with information regarding the new 20-franc banknote, issued into circulation today. 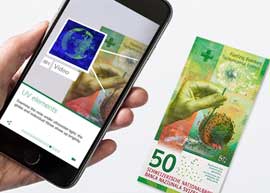 The Swiss Banknotes app was first issued last year when the 50-franc – the first of the latest ninth Swiss banknote series – was issued into circulation.

The free mobile app, compatible with Apple iOS and Android smartphone operating systems, allows users to position their mobile device over the new banknote and, using the device’s camera, view details regarding the note’s security features and design elements provided by the app.

The app allows users to magnify the security features for closer inspection, and will also play a short video clip.

The app is designed to help users familiarise themselves with the features of the new family of banknotes, but will not identify whether a scanned banknote is counterfeit.

Read the press release from the SNB here.