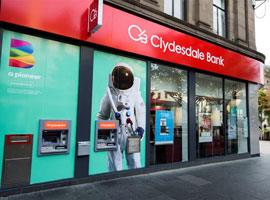 The new Clydesdale note will continue to feature the famous Scottish poet and lyricist, Robert Burns, who died 221 years ago. It will also include illustrations and elements featuring the old and new towns of Edinburgh.

Like the recently released £5 note, the £10 note is slightly smaller in size than its paper predecessor.

“More durable and more secure than normal paper notes, the move towards polymer is an important milestone in our history of innovation. We have been issuing banknotes since 1838 and it’s just as vital as ever to ensure we are creating and developing currency that is fit for modern day use.

“It is also fitting that we are making this announcement on the 221st anniversary of the death of Robert Burns. We continue to celebrate his life and work by featuring him on our £10 currency. ”