The Reserve Bank of Australia has revealed the design of the new $10 banknote due to be issued in September 2017, part of the Next Generation series of banknotes. 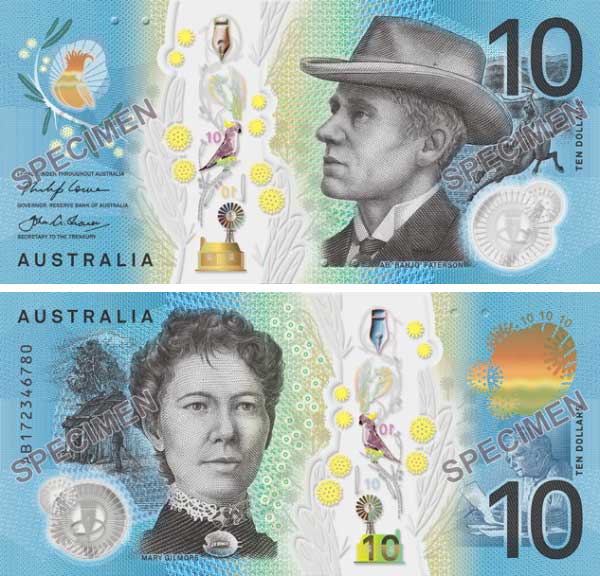 Images courtesy of the Reserve Bank of Australia.

Images released by the Central Bank show the basic design artwork on the front and back of the soon to be released banknote.

The design of the banknote is centred around two famous Australian writers; Dame Mary Gilmore and AB ‘Banjo’ Paterson. Their work is recognised in several elements of the banknote’s features including a pen nib seen in the top-to-bottom clear window and poetry excerpts written in microprint.

Security features of the ten dollar banknote are similar to that of the Next Generation five dollar banknote that began circulating on September 1, 2016. As mentioned, a clear top-to-bottom window is included, in which there is a holographic foil. There is also an optically variable ink feature which gives a rolling colour effect.

Next Generation Banknotes of Australia

All banknotes of the Next Generation banknote series will include differing species of the native wattle plan as well as a native bird. The $10 banknote features a Bramble Wattle (Acacia victoriae) and the Sulphur-crested Cockatoo (Cacatua galerita).

All new banknotes retain some of the key aspects of the previous banknote series to aid with the transition to the new banknote designs, such as the banknote’s size and main colour theme. Each of the notes include a tactile security feature to assist those with visual impairments to identify the note’s denomination. The $10 has two raised circles on the front left of the banknote.

The next banknote from the Next Generation series is the $50, expected to be issued in 2018. The remaining $20 and $100 denominations will be issued in the following subsequent years.

Read the press release from the Reserve Bank of Australia.